Found predominantly in shrub-lands and along trails, Pacific Coast ticks (Dermacentor occidentalis) can be found all the way from Oregon to northern Baja California and even Mexico. Although the Pacific Coast tick is the most common tick found throughout most of California, they are easily confused with other less common ticks. 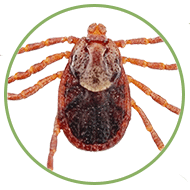 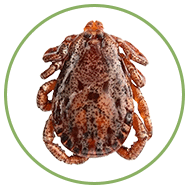 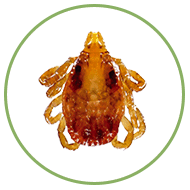 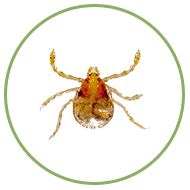 American Dog Ticks have a dark brown body; with females having an off-white scutum (dorsal shield), while adult males look more mottled. They are flat and oval in shape, and usually brown with whitish-gray markings. Similar to the Blacklegged “Deer” Tick, these ticks have 6 legs as larvae but have 8 legs when they are nymphs and adults. They range anywhere from 5 mm to 15 mm in size depending on whether or not they are engorged.

The American Dog Tick exhibits a three-host tick life cycle. In warmer regions of its southern range all three stages may be active on hosts throughout the year with a pronounced increase of occurrence during spring. In northern regions, larvae and nymphs are active spring to autumn while adult questing appears to be highest in spring. Gravid females may lay from 4,000–6,500 eggs.

American Dog Ticks develop from the egg stage, to the 6-legged larva, to the 8-legged nymph, and finally to the adult. The cycle requires a blood meal before progression from larva to nymph, from nymph to adult and by the adult for egg production. This cycle also requires three different hosts and requires at least 54 days to complete, but can take up to two years depending on the host availability, host location and the temperature.

After five to 14 days of blood feeding, a fully engorged female D. variabilis drops from the host. She digests the blood meal and develops her egg clutch over the next four to 10 days. She then lays anywhere from 4,000 to 6,500 eggs on the ground (Matheson 1950). About 26 to 40 days later, depending on the temperature, the eggs hatch into larvae (James et al. 1969).

After hatching, larvae remain on the ground or climb growing vegetation where they wait for small mammals, such as mice, to serve as hosts for their first blood meal. This host location behavior is called questing. Under favorable conditions, larvae can survive up to 11 months without feeding. After contacting and attaching to a host, larvae require from two to 14 days to complete blood feeding. After feeding, larvae detach from their host and fall to the ground where they digest their blood meal and molt into the nymphal stage. This process can take as little as a week, although this period is often prolonged.

Nymphs can survive six months without a blood meal. After successfully questing for their second host, which is normally a slightly larger mammal (such as a raccoon or opossum), the nymphs will blood feed over a three to 10-day period. After engorging, they fall off the host, digest their blood meal and molt into an adult. This process can take anywhere from three weeks to several months.

Adults can survive two years without feeding, but readily feed on dogs or other larger animals when available. Questing adult ticks climb onto a grass blade or other low vegetation, cling to it with their third pair of legs, and wave its legs as a potential host approaches. As the hosts brush the vegetation, the ticks grab onto the passing animal. Mating occurs on the host and the female engorges within six to 13 days after which she drops from the host to lay her eggs and then she dies, thus completing the cycle (Matheson 1950).

Even though not much is actually known about the Pacific Coast tick, as far as we know, all life stages of the tick can transmit Rocky Mountain Spotted Fever. Both nymphs and adults can transmit 364D Rickettsiosis, Tularemia, as well as Bovine Anaplasmosis to cattle. These ticks also have been implicated in cases of tick-bite paralysis in cattle, deer, and horses.

American dog ticks prefer grassy areas with low vegetation where larger animals commonly pass by and thrive in areas that are also accessible to humans. When these ticks latch on to dogs, they are brought into the home and can potentially be transferred to humans. American dog ticks are extremely resilient and are able to survive for 2-3 years without feeding.

This is one of the most widely distributed ticks in California. It is found throughout the state except for the very dry regions of the central valley and the southeastern desert region. The only other areas it has been collected in are Oregon and Baja, Mexico. 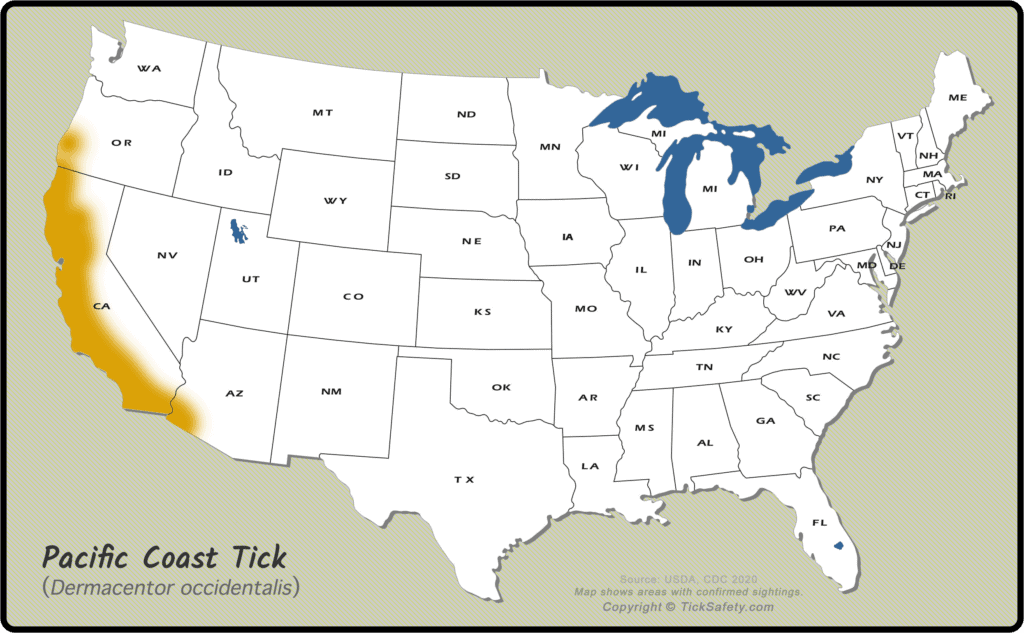 The American Dog Tick occurs primarily in wooded, shrubby and long-grass areas. However, it is possible for residential areas to support populations of this tick. Shrubs, weeds, tall grass, clutter and debris on the property attracts the rodents that are hosts for immature ticks. By maintaining grass short, removing possible rodent harborage, and sealing cracks and crevices in and around the property one can directly reduce or prevent local tick populations.

Keeping grass and weeds cut short decreases humidity, which helps kill ticks or makes an area undesirable for ticks and rodents. Additionally, it makes it difficult for ticks to climb on the vegetation and wait for its host. If pesticides are applied, cutting the vegetation short increases effectiveness and allows for better coverage. Removing rodent harborage areas may reduce an infestation.

Because dogs can easily pick up ticks while walking on infested grass or roaming through wooded areas, it is necessary to treat the pet properly. There are many products that can be applied to prevent or treat a tick infestation on an animal including topical treatments and sprays. Regularly grooming, washing bedding, and examining the dog are strongly recommended to prevent tick infestations.