The Asian Longhorned Tick (Haemaphysalis longicornis) is widely known as an invasive species in New Zealand and Australia (known there as a Bush tick), and has now made an appearance in the U.S.  Although believed to have been in the U.S. since around 2010, it has only recently been “rediscovered” in 2017 on a farm in New Jersey. Since then, there have been additional confirmed sightings in West Virginia, Virginia, Maryland, North Carolina, Ohio and Arkansas.

Larvae of Asian Longhorned Ticks have three pairs of legs with a body size of approximately 0.58 to 0.62 mm in length and 0.47 to 0.51 mm in width. The scutum (dorsal shield) of the larva is approximately 1.5 times as wide as it is long. As with nearly all hard-bodied ticks, both nymphs and adults have eight legs. The presence of genital pores on adult females makes them distinguishable from the adult males and nymphs, where it is absent.

An un-engorged (prior to a blood meal) nymph is about 1.76 mm in length and 1 mm in width. The scutum of the nymph is approximately 1.25 times as wide as long, and its outline is broadly rounded. Females and males are reddish-yellow in color, but have different body sizes.

The Asian longhorned tick is a three-host tick; meaning that after taking a blood meal, each active stage (larva, nymph, and adult) will leave the host to digest the blood meal, and develop and molt into the next stage, or if an adult female will lay eggs and die.

The engorged (fully blood-fed) female can produce up to 2,000 eggs over 2 to 3 weeks. The larvae hatch about 25 days after oviposition when held at 77°F. These newly-hatched larvae immediately search for a host. After locating and attaching to a host, they feed for 3 to 9 days. Once larvae are engorged, they drop from the host and digest the blood meal before molting into nymphs, a period that may take up to two weeks.

Nymphs then locate and attach to a new host, feed for 3 to 8 days, and fall from the second host, where they take about 17 days to digest their blood meal and develop into adults. After finding a suitable host, adults may feed for 7 to 14 days before dropping from this third host.

The Asian longhorned tick can compete its life cycle in six months, but typically one generation occurs per year, with most immature ticks entering diapause (dormancy) during winter and other cold periods.

Males are usually uncommon in invasive populations, such as the populations in Australia and New Zealand, and this appears to be the situation in the U.S. populations, although still unconfirmed.

The ability of female Asian longhorned ticks to produce offspring in the absence of males could be the reason that this tick has spread rapidly and reached high abundances in Australia and New Zealand.

The annual pattern of Asian longhorned tick populations is dependent on temperature, humidity, day length, and host availability. Temperature and day length are the major factors determining the time to complete each stage. At temperatures ranging from 12 to 30°C, it takes 17 to 100 days for larvae to hatch, 11 to 45 days for blood fed larvae to molt into nymphs, and 13 to 63 days for blood fed nymphs to molt into adults.

Ticks with larger body sizes may need longer periods to feed and develop (the adults feed for a longer time than the larvae). Also, the feeding period is extended when a larger number of ticks are present on same host.

Dehydration is the most limiting factor for tick survival because the ticks spend approximately 90% of their life off hosts in potentially desiccating environments. Unfed Asian longhorned ticks tend to lose water more rapidly than engorged ticks of the same species.

Pathogens of human and veterinary medical importance that  has clearly been shown capable to transmit or repeatedly found infected with, and the associated parts of the world, include:

The Longhorned tick is a confirmed transmitter of bovine theileriosis and parasites that cause babesiosis infection in animals. Bovine theileriosis can reduce dairy production on cattle farms and occasionally kill calves. The ticks themselves can also cause anemia in sheep and cattle when densities are high.

In Asia, field-collected Longhorned ticks can harbor pathogens that are also present, or very closely related to those found in the US. These include Anaplasma phagocytophilum, Ehrlichia chaffeensis, Babesia, and Powassan virus.

The capacity of this tick to act as a vector for these pathogens to humans has not been studied enough to make a definitive determination as to whether or not the tick is considered a viable transmission vector. This species is also considered a possible vector for Thrombocytopenia Syndrome Virus (SFTSV) in China, an emerging infectious disease with a reported human mortality rate of up to 12%.

There are also a few pathogens that have been recovered from collected Longhorned ticks, but only rarely, such as Anaplasma ovis, Anaplasma marginale, Anaplasma platys, Ehrlichia ewingii, Ehrlichia canis, Bartonella sp., Rickettsia sibirica, Orientia tsutsugamushi, TBEV and Hepatozoon canis.

While not much is known about this species of tick and how it behaves in the U.S., this three-host tick tends to prefer livestock such as cattle, sheep and horses, however has been known to also bite humans, especially those tending livestock. As larvae and nymphs, as with many ticks, Longhorned ticks tend to prefer birds and small mammals such as white-footed mice.

While the East Asian Longhorned Tick is naturally endemic to Asia (China & Japan primarily), it is also widely known as an invasive species in New Zealand and Australia.

It has now also made an appearance in the U.S., and although they are believed to have been in the U.S. since around 2010, it has only recently been “rediscovered” in 2017 on a farm in New Jersey. Since then, there have been additional confirmed sightings in West Virginia, Virginia, Maryland, North Carolina and Arkansas. 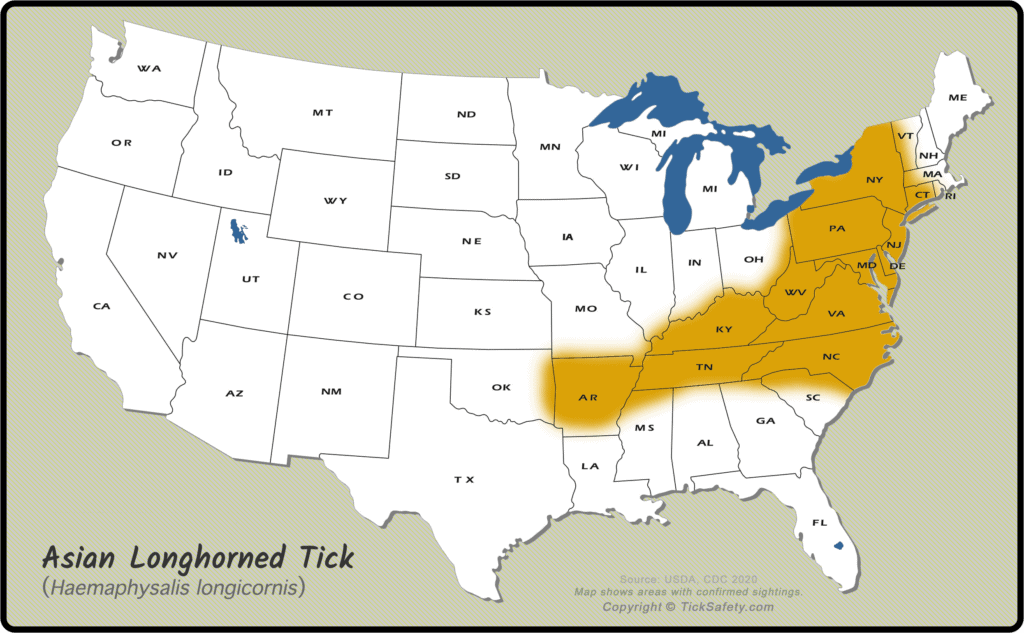 The East Asian Longhorned Tick is often and easily confused with two other ticks commonly found in the United States: the Rabbit Tick (Haemaphysalis leporispalustris) and Bird Tick (Haemaphysalis chordeilis). Both are found distributed across the country. 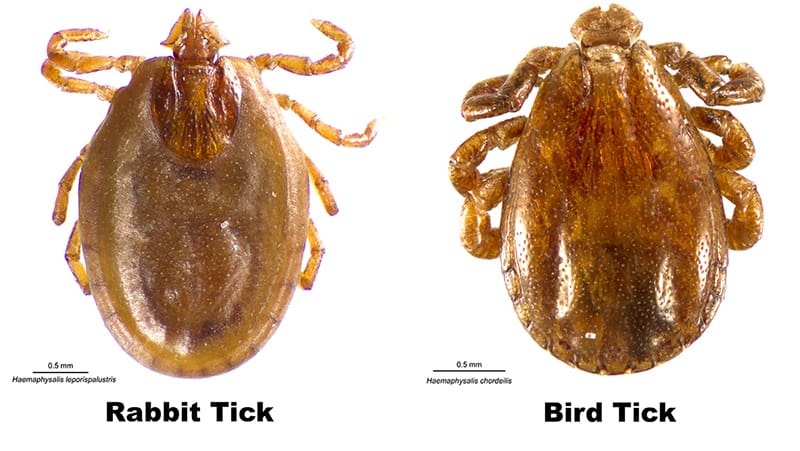